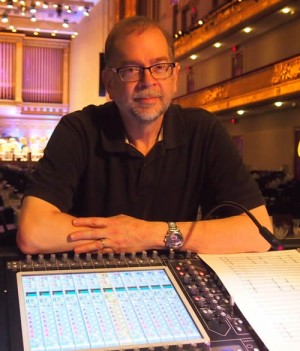 Steve Colby serves as the principal sound reinforcement engineer for the Boston Pops and Boston Symphony Orchestras, and has been the sound designer and mixer for numerous tours of the United States and Japan.

In addition to his work with the BSO, he has provided design, mixing and consulting services for the Atlanta, Baltimore, Utah, Pittsburgh, Kansas City and American Symphony Orchestras, as well as the New York Philharmonic. Other sound reinforcement projects have included sound design and mixing for an outdoor Boston Lyric Opera production of Carmen that drew an audience of 170,000 over 2 performances, and a stadium performance of Aida in Shanghai, listed in the Guinness Book of World Records as the largest opera production ever mounted.

In 2009-2010, Colby toured the US, Canada and Europe as the sound mixer for the Star Wars in Concert tour, a joint venture between Lucasfilm Ltd. and Another Planet Touring. In 2012 he served as the orchestra mixer for Barbra Streisand’s “Back to Brooklyn” Tour. Recent projects include Sound Design for a production of the Bernstein “Mass” with the Philadelphia Orchestra.