Charles Ansbacher creates the Landmarks Orchestra. He strongly believed in making the arts a significant part of people’s lives regardless of their socioeconomic status.[/rt_tl_event][rt_tl_event year=”2002″ title=”Our Name”]In an interview given to the Lowell Sun, Ansbacher describes Landmarks as “a new orchestra that gets its name because, in general, we try to perform at landmark locations… That is our main mission: to bring historical music to historical places.”[/rt_tl_event][rt_tl_event year=”2007″ title=”Hatch Shell Series Begins”]Landmarks begins a nine-week concert series at the DCR’s Hatch Memorial Shell on the Esplanade. Once this happened, our audience grew quickly.[/rt_tl_event][rt_tl_event title=”Honoring Charles” year=”2009″]The city of Cambridge honors Charles Ansbacher for his core principle that art must be a part of people’s lives by naming a promontory after him at Fresh Pond. The Esplanade Association and the Emerald Necklace Conservancy also honor him for bringing music to significant settings and raising awareness of the importance of open space in society.[/rt_tl_event][rt_tl_event title=”Breaking Down Barriers” year=”2011″]Our Breaking Down Barriers Accessibility initiative is created. This provided accessibility services such as American Sign Language (ASL) interpreters at each concert, reserved seating areas, text to speech programs, and trained ambassadors to provide assistance.[/rt_tl_event][rt_tl_event title=”New Music Director” year=”2011″]Christopher Wilkins is named as the new music director after the passing of Charles Ansbacher in 2010. 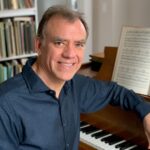 [/rt_tl_event][rt_tl_event title=”‘I Have a Dream’ Commission” year=”2013″]Commemorating the 50th anniversary of Martin Luther King Jr.’s “I Have a Dream” speech, Landmarks presents a concert included pieces that represent themes in King’s speech. We wanted to provide an ASL translation of the speech. Since there were none that existed, we commissioned the very first one to be made, with the blessing of the King estate. The translation was performed at the Hatch Shell concert on August 28, 2013.[/rt_tl_event][rt_tl_event title=”‘Deep River’ Concert” year=”2019″]Landmarks and One City Choir perform a concert titled, “Deep River,” referencing the famous spiritual. The program contained only music written by Black Americans, including selections from the musical Show Boat, which has been long criticized for promoting harmful Black stereotypes. Landmarks held a panel at WBUR’s CitySpace titled, “Who Should Sing Ol’ Man River?” Panelists and audience members discussed how race has been portrayed in musical theatre and the concert stage in the past and present.[/rt_tl_event][rt_tl_event title=”Landmarks & COVID” year=”2020″]Due to the Coronavirus pandemic, all of Landmarks programs go virtual. We created a series called “Interludes,” which featured unique stories and beautiful music to bring comfort, solace and joy in a period of great uncertainty.[/rt_tl_event][rt_tl_event title=”Return to Live Music” year=”2021″]Celebrating Landmarks 20th season, and after over a year with virtual programming, our 2021 season is fully in-person! We began with an uplifting performance titled “Lift Ev’ry Voice” performed July 16, 2021 at Bethel AME Church in Jamaica Plain and July 18, 2021 at Arlington Street Church.[/rt_tl_event][rt_tl_event title=”2021 & Beyond”]We have had an amazing two decades of bringing great music to a lot of Boston neighborhoods and landmarks. We couldn’t have had these past twenty years of success without your support. Thank you and keep on the lookout for more concerts in the near future![/rt_tl_event][/rt_timeline]

Explore our past seasons below!