Join us at the Hatch Shell one week before the concerts begin for an evening of family fun and musical games. Try out real orchestral instruments at our largest “Musical Playground” ever, practice your conducting skills at the “Maestro Zone” to recordings of some favorite classics, get your face painted, and enjoy exhibits from our friends at the Boston Children’s Museum, Knucklebones, the Beat Bus, and more. 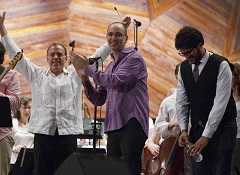 In the centenary year of The Planets, the Orchestra welcomes the St. Paul’s Girls’ School Choir for whom its spell-binding finale was composed. Holst’s masterpiece explores the astrological influence of the planets on human personality and behavior. Young musicians of ZUMIX perform an original work echoing Holst’s fascination with the human psyche. Other music inspired by the heavens includes Debussy’s bewitching Clair de lune.  Rain Date: Thursday, July 19. If it rains on July 19 as well, the concert will be held at First Church Cambridge (11 Garden St., Cambridge, MA 02138) 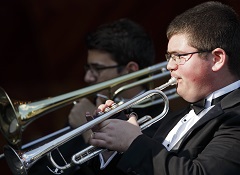 For over fifty years, the Boston University Tanglewood Institute has been among the country’s most prestigious musical training programs. These gifted teenagers perform a program built to showcase their talents. It features the Young Artists Orchestra in Stravinsky’s electrifying Rite of Spring and the Young Artists Wind Ensemble in music of Leonard Bernstein, who was a mainstay at Tanglewood since he was a student there in 1940. 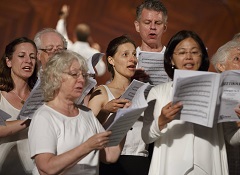 The Boston Landmarks Orchestra, One City Choir, Back Bay Chorale, and a quartet of soloists combine forces in Verdi’s monumental Requiem, a work Hans von Bülow described as “opera in church vestments.” The music opens in hushed, prayerful tones, and closes with an impassioned plea for salvation. In its most famous “scene,” trumpets surround the audience as if on Judgment Day. It is a representation to rival Michelangelo’s.

This performance is dedicated to the memory of Robert Honeysucker (1943-2017). His sonorous voice and expressive musicianship graced our stage many times, including our 2008 performance of the Verdi Requiem at the Hatch Shell, and our memorable Beethoven’s 9th at Fenway Park. He was not only one of America’s finest baritones, he was a true friend of Boston Landmarks Orchestra from our very beginning, and he is truly missed. 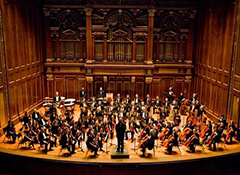 Boston’s medical community orchestra has been a leader in innovative programming and community engagement for thirty-five years. Recognizing that music is a healing art, the Longwood Symphony serves the Greater Boston area through performances and programming related to the services these musicians provide in their medical professions. Music Director Ronald Feldman conducts. 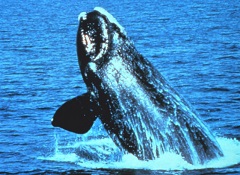 Animal song and representations of sea life are woven together in a program conceived and presented in collaboration with the New England Aquarium. Debussy’s La Mer summons the mysterious power and psychological depths of wind and waves. Stella Sung’s seascape creates a watery dialogue between marine and human life. And Moby Dick rises again in the haunting music of Bernard Herrmann, Alfred Hitchcock’s most frequent musical collaborator. 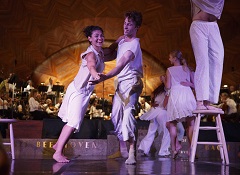 Celebrating the 100th birthday of Leonard Bernstein—who made his professional debut as a conductor at the Hatch Memorial Shell—the Landmarks Orchestra performs music to move by from diverse cultures. Boston Ballet II and Peter DiMuro’s Public Displays of Motion are joined by dancers from throughout the community. Judging from past programs, the urge for audience members to get up and dance may prove irresistible. 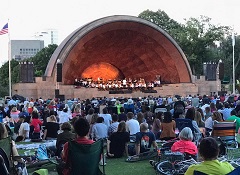 Channing Yu and the Mercury Orchestra return to the Hatch Shell after a highly acclaimed appearance in 2017. The orchestra boasts some of the most talented amateur musicians in the region who come together each year to deliver invariably memorable performances. The final concert of the 2018 season is a journey deep into the heart of the Russian repertoire.

The Boston Landmarks Orchestra is proud to participate in Highland Street’s Free Fun Fridays initiative again this summer! This year’s event will take place at the Boston Children’s Museum and will include a performance by Landmarks Orchestra musicians and a musical instrument playground. (Instrument Playground begins at 11:00am. Concert begins at 1:15pm.)
*Weather Note: Both the Instrument Playground and Concert were relocated indoors at the Museum.

Program: “The Birth of Jazz”

A musical instrument playground for all ages at Reading Public Library (located at 64 Middlesex Ave., Reading, MA), presented in partnership with The Musary.

Our annual performance at the beautiful Pinebank Promontory, adjacent to Jamaica Pond,  presented in partnership with the City of Boston Parks and Recreation Department and the Emerald Necklace Conservancy. This event will also include a musical instrument playground prior to the concert. (Instrument Playground begins at 5:00pm. Concert begins at 6:00pm.)

Program: “The Birth of Jazz”